In a saucepan, bring to the boil the cream and the milk.

Combine together the egg yolk and sugar.

Cook as creme anglaise and strain directly the mix on the melted milk chocolate.

Use the hand blender to mix well until it's smooth.

Leave to cool down until 25°C and add the whipped cream.

Cook the mandarins for around 30 minutes boiling water.

Cut half of them in brunoise and the other half you make into a puree with a handblender.

Mix the sugar with the pectin and mix it with the lime juice and mandarin juice.

Mix all ingredients into a pan and bring to a boil.

Cook sugar and water to 120°C and make italian meringue with egg whites, whip it till it is cold.

Add the butter in three part to the egg white mixing it by hand.

Mix marzipan with sugar (A) with a paddle.

Slowly add the eggs and eggs yolks, scrape and make sure there is no lumps, then change to a whip and whip it to light.

Whip the egg whites and sugar (B) till stiff peak and gently fold into the egg yolks.

Fold in the sifted flour and cocoa powder in three additions.

Drizzle and fold in the melted butter and cocoa mass mixture.

Whisk egg whites with sugar (A) till stiff peak.

On a separate bowl, whisk eggs with the sugar (B).

Mix the two gently and add the sifted flout and starch.

Mix trimoline A, sugar and water and boil till 110°C.

Place the trimoline B and the gelatin mass into the mixing boil.

Mix both together whip till airy.

Fill up the silicone mould with Guayaquil extra bitter 64% and pour it empty again to make it as thin as possible.

Pour the milk chocolate mousse inside and place the triangle interior with Mandarin marmalade and Biscuit joconde inside.

Pipe some Hazelnut mousseline on top and covered by the Milk chocolate mousse.

Close the mould with the Dark chocolate sponge and place into the freezer.

Spray the cake with the Dolce Velluto Spray Pavoni Italia green DV8, and pipe the soft Marshmellow sprinkled after with some snow sugar. 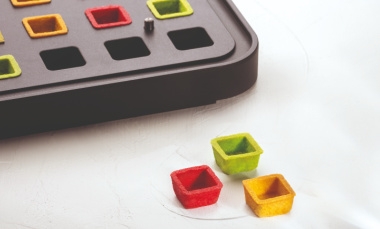 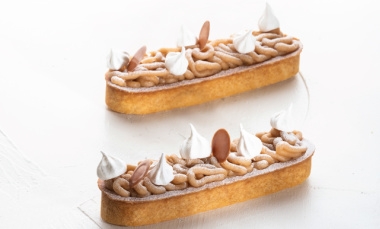 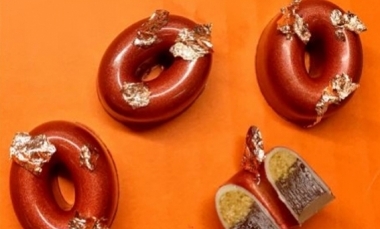 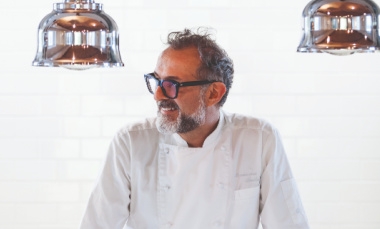 Discover the collaboration between Massimo… 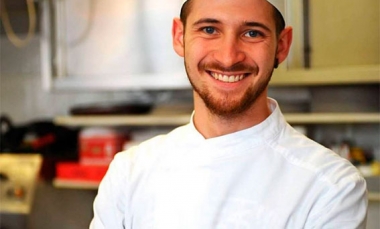 Mattia Cortinovis's life has always been… 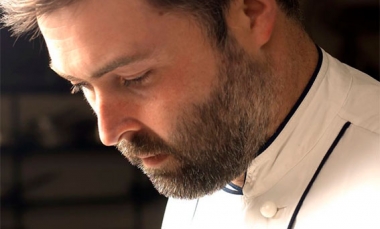 Discover the collaboration between Massimo…

Mattia Cortinovis's life has always been…